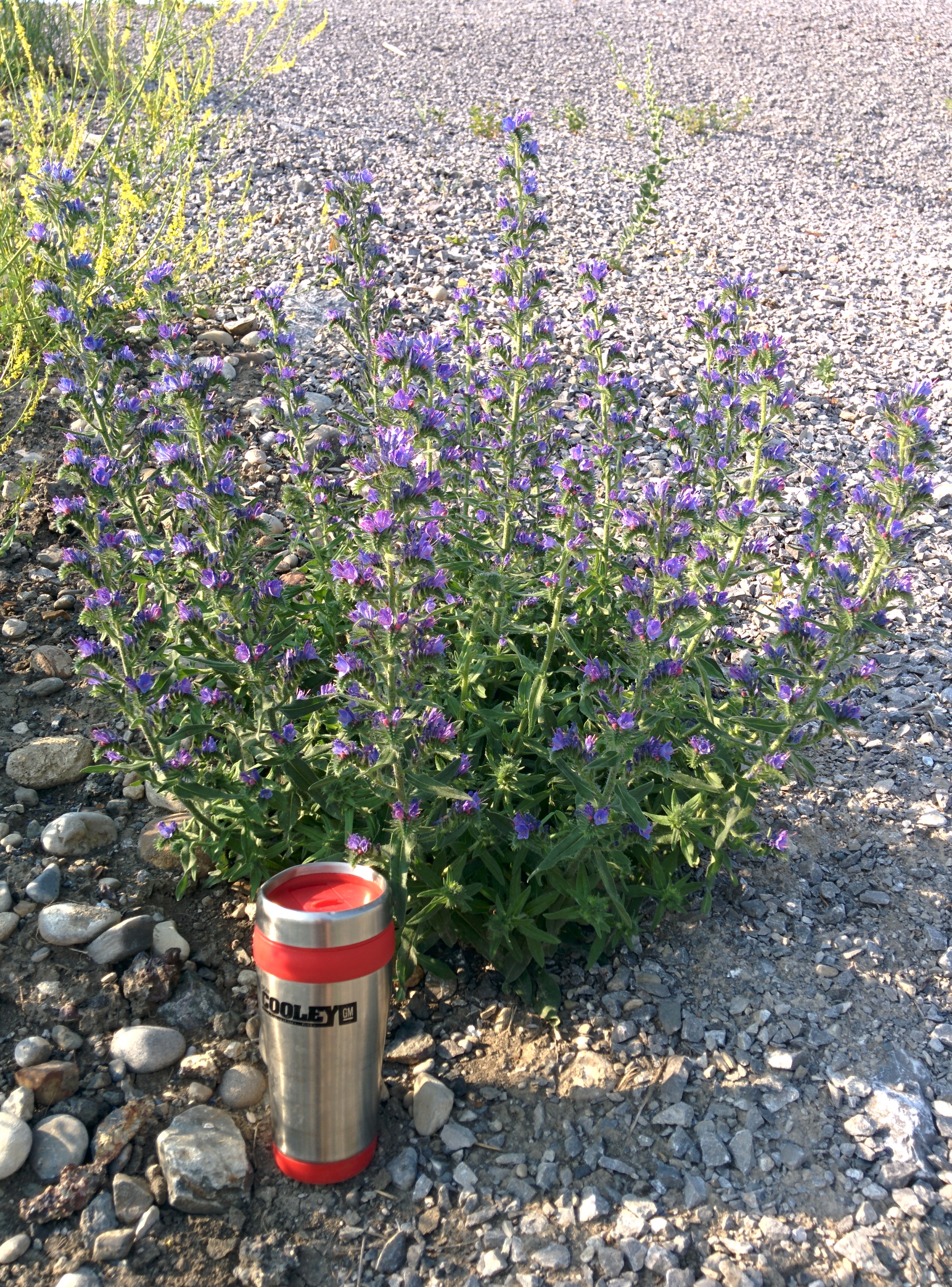 Blueweed, also known as Common Viper’s-Bugloss, is a deeply tap-rooted biennial herb (occasional short-term perennial) from the Borage (Boraginaceae) Family, native to southern Europe. This species prefers disturbed, gravel-textured soils, and is a huge issue on our gravel-bottomed creek and riverine riparian areas, displacing preferred native vegetation. It also does well in heavily grazed pastures, roadsides, gravel pits, old construction zones, and other disturbed areas. Seeds from Blueweed move readily in seed-contaminated gravel and soil, including on equipment that works with these materials. Seeds will also spread in flowing water, depositing on the stream banks to germinate and spread.

Understanding Blueweed’s biennial (two-year) life cycle is critical to maintain control of infestations! First year plants (flat to the ground rosettes) germinate from seeds, and these tiny plants are inconspicuous (see photos) as they establish long taproots. First year Blueweed plants do not flower! First year leaves shrivel in the fall with killing frost, and the established taproot overwinters. The next spring, second year Blueweed plants regenerate from the overwintered taproot, and send up the familiar branched blue-purple flowering stalks. These striking flowers appear in July in most in our region (flowers are very occasionally white). Lance shaped second year leaves and stems are covered with dense, quite prickly hairs that give a mottled appearance. Flowers mature to seeds in August, but if second year plants are mowed, or cut, they may flower right into late fall (see next paragraph).

Best results to control Blueweed will be realized with selective broad-leaved herbicide treatments of first year rosettes and early spring second year plants! If treating second year plants with herbicides, do so well prior to flowering, ensure the entire plant is thoroughly covered, and add a surfactant to help penetrate through the bristly leaves and stems.

Hand pulling and bagging flowering second year plants is effective (ensure you wear heavy gloves), but make sure to get as much of the root as possible. Failure to do so will stimulate the plants to regenerate from the taproot in a shorter, bushier form laden with flowers. This bushy regrowth can persistently flower right through October of the second year’s growth, but these plants will generally die and seed out during killing frost at the end of their second year.
Blueweed seeds are viable for about a decade. The mistake many people make with Blueweed control is thinking they’ve beaten an infestation after one or two year’s treatment, because they don’t see any flowering plants. More than likely, that’s because the infestation after a couple of year’s control efforts only yields first-year (non-flowering rosette) seedlings. It is critical to maintain control pressure on the non-flowering rosettes in Blueweed infestations for at least five years (and up to ten years), not letting any mature to second year flowering plants!

More information can be found in the Blueweed fact sheet from the Alberta Invasive Species Council, and you can report this invader yourself using their free EDDMapS application on your mobile device. For local control options for Blueweed please contact our Agricultural Fieldman at 403-339-8741.
Photo Credits – Kelly Cooley, CoolPro Solutions